Oh my goodness, I am having so much fun drawing Pokemon spirit animals!  Over the past few days I’ve drawn Gengar and Bulbasaur. 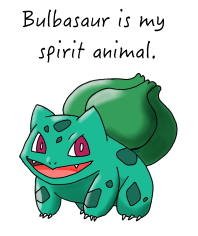 I’m experimenting more with the tools in Krita, and have been getting bolder with highlights and shadows.  I think my technique has improved!  It’s also been a lot of fun researching these Pokemon to find positive traits that would make them good spirit animals.  Check out their descriptions on threadless, if you’d like!  https://www.threadless.com/discover/s/henryx4

In other news, when I’m not working on my drawing tablet, I’m either reading gardening books or working on my Bring in the Clowns socks.  They’re coming along great- I’ve finished the first and am increasing for the toe-up gusset on the second.

The toe-up gusset is pretty interesting.  I’ll share better photos of it when both socks are done.

I just love how the rainbow yarn contrasts with the black to mimic stained glass.  It reminds me of Saint Chapelle chapel in Paris, or Grace Cathedral in San Francisco.  I also like how they are extra tall!  I asked for Doc Martens for Christmas, and I like to wear long socks with them so the boots don’t chafe my legs.  These will be perfect.

Have you missed me?  I’ve been having trouble with WordPress on my phone, and just didn’t manage to write posts on the computer (evidence that I am way too dependent upon my pocket computer!!!).  Here’s a short catch-up post!

First, the Wee Boy and most of his Halloween costume!  The Fourth Doctor’s scarf is really long, but I think it will be ok.  I’m trying to get him to wear it around the house to test it out in case I need to shorten it for safety.  It’s perfect if I wrap it around him twice, and a friend suggested pinning it in place, which I think is genius.

Second is my most recent leethalknits hat KAL, Mokia.  http://www.ravelry.com/patterns/library/mokia  It’s a pretty funky hat, but I found that my stockinette version, with the points tied together inside, isn’t too crazy for regular life.  I really can’t pull off pointy ears on a typical day.

I have been making really excellent progress with my Dalek Halloween costume.  I’ll show it to you soon– I think it warrants its own post because it might end up being something of a tutorial. 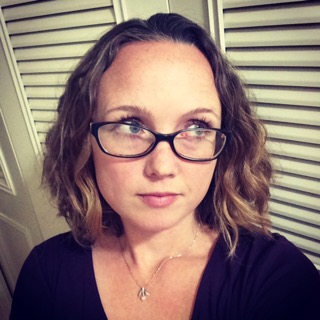 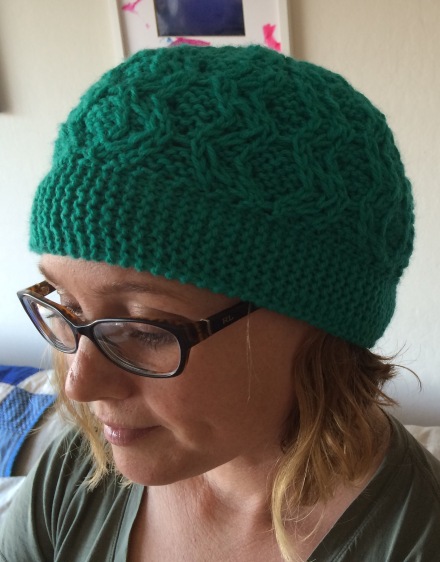 I started the next hat KAL on Tuesday, but haven’t made much progress due to my wrist needing rest, and the pattern puts some pressure on it.  So it can progress slowly but surely.

And the fourth doctor’s scarf is coming along nicely.

It should be done in a few days, with plenty of time to spare!

My birthday was about two weeks ago, but I couldn’t make it to knit night, so tonight I was on the receiving end of the secret birthday exchange!

I can’t tell you how pleased I am with what my friend knit for me, but these photos come close!

For fun, I decided to gather all my swap gifts from the years that I’ve been participating- I’ve gotten some really lovely things, and I love thinking hog my knitting friends every time I use them. ❤️

Also, my friends can tell that I like ﻿blue, eh?

The current Leethalknits KAL hat I’m working on is going very slowly. Every other row is a very cabley/twisted stitch-y row, and takes lots of concentration on top of the pattern AND stitch key. Not great for knit night or on-the-go knitting at all. So I only have twelve rows of the body done.

On the bright side, the non-cable rows are fairly fast, and I’m finally getting the hang of cabling without a needle. 😐

I have been working on my new mystery KAL hat bit by bit, and it’s going fine. There are a lot of the twisted stitches, which are not good for me, so I’m using my cable needle.

I can’t show you much because it’s a mystery KAL and my friends might see this. But this won’t spoil anything.

In other news, today was the girl’s last baseball game of the summer. She had a rough start and wanted to quit, but she stuck it out and ended up having a really good season. I’m proud of her.

as you can see, summer in San Francisco is cold and foggy. I myself was wearing a down coat and hand knit gloves, and I was still cold.

Ok, readers, I’m back!  My carpal tunnel has gotten loads better, due to rest, acupuncture, and very helpful Occupational Therapy with exercises/stretches/massage as homework.  Since I last wrote two months ago (!), I’ve managed to make lots of things, so this will be something of a photo dump.  I hope you don’t mind!

In sewing news: I made myself a Tardis skirt!  It’s this simple lined skirt by Robert Kauffman: http://www.robertkaufman.com/quilting/quilts_patterns/simple_skirt/  It’s great!  Easy, quick, free pattern!  I’ll totally make it again, but with pockets next time.

Baby sewing!  I made these rompers for my great niece (the awesomely chubby thighed baby) and for my cousin’s granddaughter, whose daddy is a big Batman fan, and I happened to have the right amount of Batman fabric for a romper and a reversible bib!

Then I made some eye masks for the Girl’s best friend and family, who just moved home to the UK.  http://www.tillyandthebuttons.com/2015/07/how-to-make-eye-mask-free-pattern.html 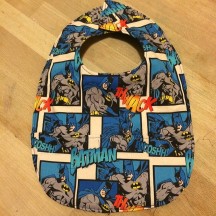 In knitting news, I’ve made two hats for the Leethalknits mystery hat club.  These are Vanguard and Omnia.  http://www.ravelry.com/patterns/library/vanguard   http://www.ravelry.com/patterns/library/omnia  The special increases on Omnia hurt my hands, so I switched to regular old kfb, and it was much better.  I also like the ridge that kfb made, as opposed to  the sloppy eyelets I was getting with the center double increases.

In bear knitting news, I’ve finished several new bears.  Last night I finished one more, which I haven’t been photographed yet.  I’ve finished up to the letter R (Rugen)and have started S (Saruman). 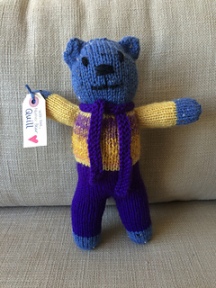 And I’ve had several bear sightings in Africa!  I might be missing a few since I haven’t been keeping up on here, but here are a few!  Kylo, Henrietta, Buttercup, and Gandalf.  You might notice that most are from my current journey through the alphabet, where I’m naming them for characters from my favorite movies, so I have to get more sent out!  I sent a box to Minneapolis last week, so I’m doing well with these.  It helps that the stockinette doesn’t irritate my hands/wrists.

I’ve also swatched for a new top, but haven’t started it yet due to a trip and my fallback knitting of bears.   This is a Berroco booklet I found at Imagiknit after falling in love with the knitted sample on display.

And of course, we’ve had lots of local adventures, mostly centered around getting the kids out in the trees.  We’ve played at Stow Lake, in the Presidio, many parks and playgrounds, the Exploratorium, and we’ve done lots of swimming at the pool….  Yesterday the kids and I came back from 3.5 days on the Lost Coast, which was gorgeous (all the pics below except the line of children at the SF Botanical Gardens). 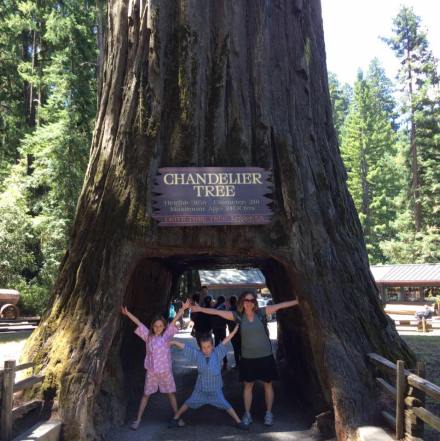 Yep, we’ve been having some pretty good summer adventures.  Mostly our days are unstructured, aside from Thursdays and Saturdays, when the Girl has been playing baseball with the Junior Giants.   Yay, summer!  And yay for being recovered enough from Carpal Tunnel to be able to craft and blog again.  It’s nice to be back!

Yesterday I found myself with some free time and an urge to start a new sewing project. However, when I peeked at my project basket, I found a few UFOs and was reminded of a project with a deadline coming up this weekend. After a few scattered sessions in my studio (aka my kitchen table), I’ve finished four of the pieces.

these ate quite big- they’ll easily hold a uniform plus shoes.

And two oddly-shaped project bags, eeked out of leftover fabric too big to be scraps and too awesome to not eke out a few little somethings for myself:

I’m ridiculously pleased to have a few colorful project bags to brighten up my knitting. These are pretty small- they’ll fit a sock or hat project, but not much else.

Today I was also able to get some better, naturally-lit shots of my Provocateur hat. A few shots here, to show you the funky construction.

Confession: I had my doubts about this hat. I didn’t know if it would fit, if I was doing it right, if I’d like it…. Maybe that’s why I powered through it. I did about 50 rows tonight- half were plain purl, so it’s not exactly amazing, but it was enough to finish! Before the three needle bind off:

one still wonders, what is this!!??

After the bind off: 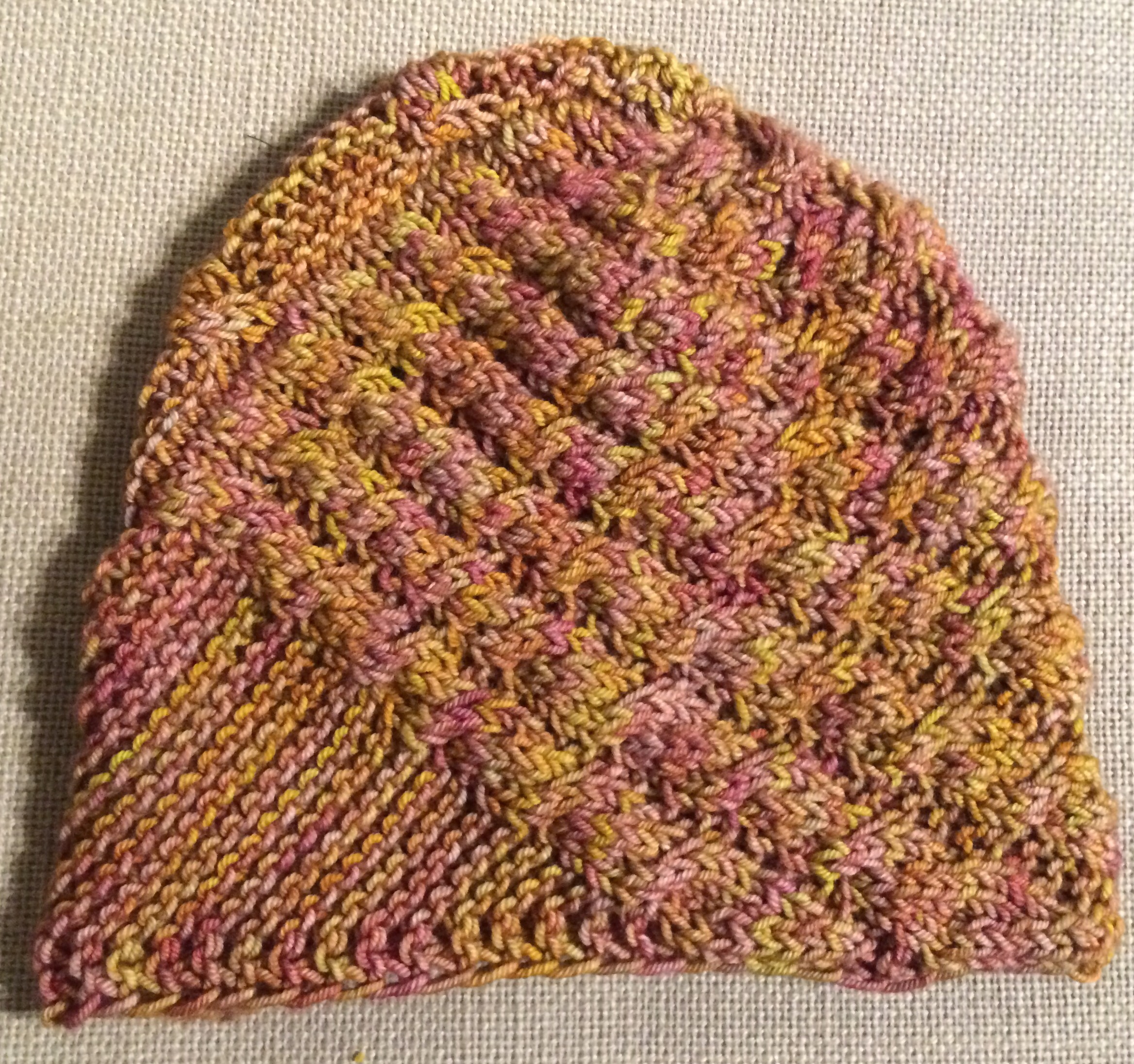 And one mediocre modeled selfie so you get an idea of the fit. 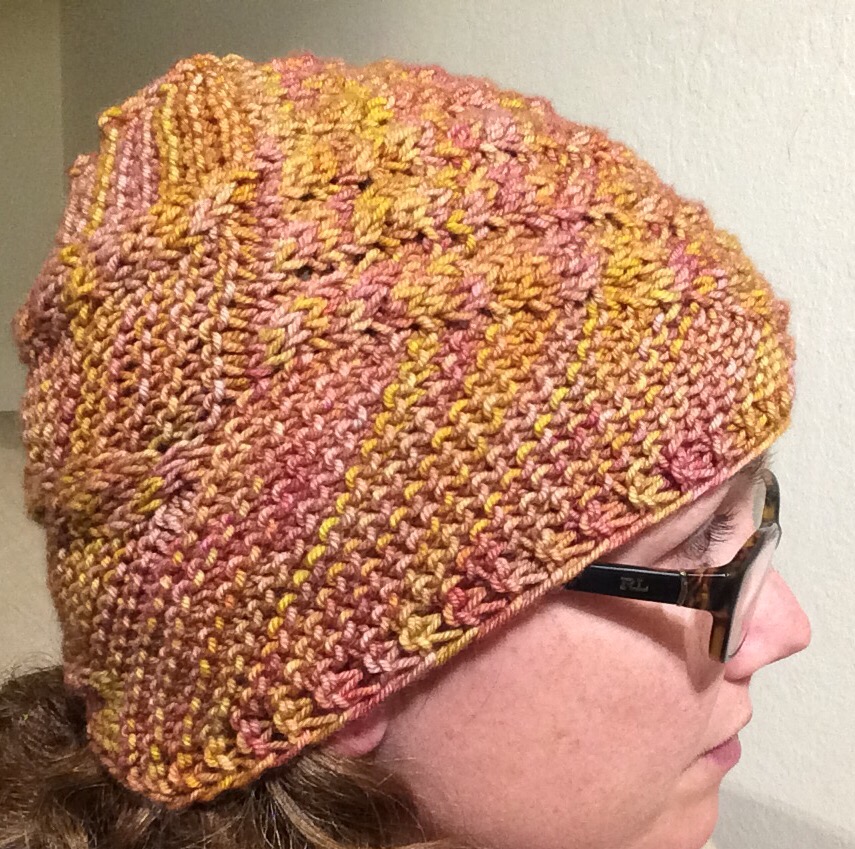 it fits! it fits WELL!

I’ll block it, which might help the uneven edge a bit.  Overall, I’m extremely pleased with this hat, considering my rough start and great trepidation with such a mysterious pattern and unusual construction!

Today I had lots of unexpected knitting time, and made it more than half way through my Provocateur hat. 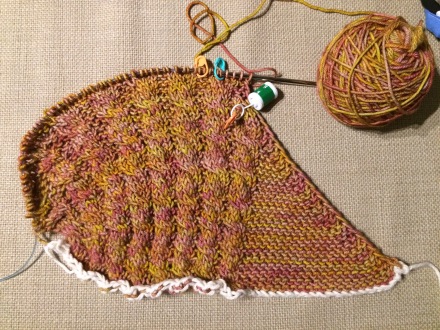 Obviously, this hat features unusual construction; a provisional cast-on, short rows… There will be a three needle bind off at the end. I’m very curious to see how this ends, which is what keeps me going!