Remember last night when I signed off, off, saying that  I was going to watch a movie and knit? Well, I didn’t.

You see, I’d had a stealthy sewing project in mind, but I had to finish the quilt first.  Last night was the perfect chance to get at it!

Remember the wee girl’s class quilt? Well, some of the kids were so sad that only one of them would end up with the quilt in the end, so I thought it’d be nice to make a little something with the leftover fabric- one for kid, so they’d each have a piece of the quilt in the end. I started by sewing small pieces of scrap fabric together. 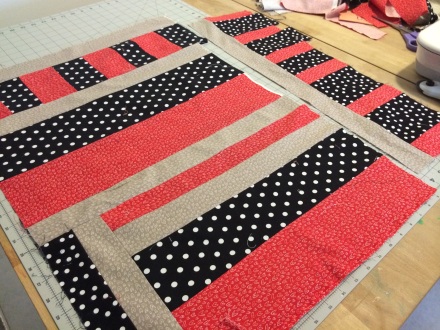 Then the smaller parts were sewn together until I had a nice big piece. I cut 5″x5″‘squares and eventually had…

21 squares pinned and ready to sew up:

The sewing of the squares  took much less time than preparing all the fabric. In the end, these will be sachets- next I’ll fill them with lavender, then sew them up! Part of the fun is that they’re all different! I think the kids will like them!

One thought on “I lied.”